How Does Urine Offå¨ Work?

To understand how Urine Offå¨ works, it is important to know a little about urine. Urine, whether human or animal, has three main components.

The first two components can be washed away with ordinary cleaning and commercially-available urine odor products, but the uric acid crystals are extremely insoluble and remain tightly bonded to the surface. After initial cleaning and drying with ordinary products, it may appear that the problem is solved. However, any type of moisture will reactivate those remaining crystals and the smell returns, as strong as ever.

There are a number of urine odor products available to the retail customer. Most are composed of surfactants (detergents) and a masking agent. A few also employ enzymes and some use alcohol as a solvent. Still others are chemicals, whose molecules encapsulate, or coat, the urine molecules "seal in" the odor. The shortcomings of these approaches are that the odor is usually addressed only temporarily, and the stain most times not at all. None appear to have success with old, dried urine deposits.

In the case of pets, the problem is compounded because of their territory-marking behavior and their very acute sense of smell. Even when the urine odour has been rendered imperceptible to humans, animals detect it and are compelled to re-apply their own scent! So once an animal has "gone" in one spot, they frequently return to it again and again, no matter what we do.

But now... there is Urine Offå¨ The enzymes in UO are specifically developed to work in combination with our specially adapted microorganisms (bacteria) that actually "eat" the uric acid crystals, in addition to removing the other components of urine. Effectively removing these crystals is what distinguishes Urine Offå¨ from the rest of the products we've tested.

With the source of the odor AND the stain removed, the problem is solved. Urine Offå¨ has a pleasant citrus fragrance and even that disappears when the product dries.

Be The First To Review This Product!

Help other Pet and Pony Pty Ltd users shop smarter by writing reviews for products you have purchased. 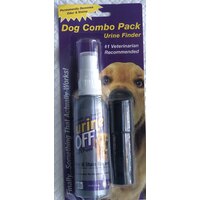